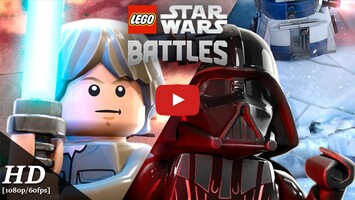 Advertisement
LEGO: Star Wars Battles is a real-time strategic card trading game that's clearly inspired by Clash Royale. This time, you'll be in charge of an army that's made up of Star Wars Lego figurines in its entirety. It's up to you to decide if you want to be part of The Force or the Dark Side.

Gameplay in LEGO: Star Wars Battles is very similar to that of Clash Royale and other similar games. Your objective here is to get rid of your enemy's base, located on the opposite side of the screen before you run out of time. To do so, you'll have to deploy your army using energy. You'll earn this energy by the second. Plus, you can build towers in the middle of the battlefield, which is a huge advantage since it'll help you deploy in more advanced areas.

LEGO: Star Wars Battles includes more than 40 different characters, which you can get and upgrade as you earn different cards. Each character includes its strengths and weaknesses, as well as their own speed and life points. Plus, some characters, like the infamous Darth Vader or Luke Skywalker include special skills that you can use during the battles.

LEGO: Star Wars Battles is an excellent PvP strategic card trading game that offers you a super entertaining and accessible gaming experience as well as quite a bit of detail. The game also includes a huge amount of content that you can collect and beautiful visuals.
Reviewed by Andrés López
Advertisement

Why is this app published on Uptodown?
(More information)

Doesn't really deserve 2 stars, but the download is working for once, but I can't play. They say their servers are busy.

Gaminator Casino Slots
Trials of Heroes
Do battle against the forces of evil in this challenging action RPG
Color Roll 3D
Unroll the colors to perfectly replicate each figure
Turn Poker
Think you can handle this high-stakes card game?
Baby fishing
Pet Wash
Adorable pets to take care of, love, and wash on your screen
Star Wars: Galaxy of Heroes
Collect and fight with your favorite Star Wars heroes
Mad Car Racer
Get in your car and shoot at the others to overtake them